With only three weeks left till race day it’s time to utilise the base that has been built and start dialling it in for race day. This week’s statistics were similar in volume to the past few weeks however there were some key differences. Needless to say, I finished the week knowing I had dome some solid work. There were two key sessions that were the focus this week and one other that really stood out.

Heading into Wednesday morning’s swim session I was really starting to feel fatigued, as Sunday’s solid long ride was catching up with me. I had planned to drop down a lane and ease it back a bit but thanks to a big turn out I was forced to slug it out in the back of the fast lane. It’s amazing that sometimes when you really feel like you have nothing to give, you turn in a great session. We were doing 3x descending 100s followed by 2 fast 50s with a 200m swim off. I saw the time repeat and knew it would only be a matter of time till I blew up. As it turns out, being fatigued meant my stroke rate remained low and I ended up making not only the first set but all four, even if

I had to skip some of the 200m swim off between sets. It really helped me recognise that sometimes when I’m pushing too hard in the pool my stroke rate increases unnecessarily and my technique deteriorates. I took this lesson into Friday’s swim session with fantastic results.

Now the first of the two key sessions this week was Thursday’s bike session. It was a 60km TT building each 20km from 70% to finish at 90%. The kicker was we had to alternate between big gears and regular gears each 10km. After a 15km warm up the first 20km felt fairly pedestrian and it was actually hard to hold back as the legs felt good. Kicking it up gear in the next 20km I started to feel the pinch about 3/4 of the way through and thought I could be in trouble here. As I hit the final 20km I was now solo and pushing hard. Everything suddenly clicked and I was feeling good and the pace felt pretty quick. I finished the final 20km in 29:42 which is as quick as my PB at 100%. The real test will come next Saturday when we line up for the traditional pre race 40km TT which is the last key hit out before race day.

The second key session for the week was Saturday’s long run. I was l 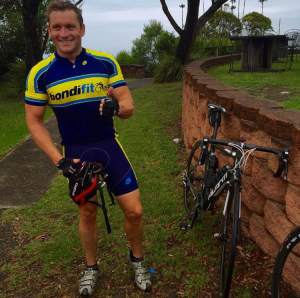 ooking forward to it after being excused from Thursday nights hill run session to freshen up. I knew I was going to need the extra rest. The session was split into two with the first half a 90 minute out and back run at a steady pace before we got into some interval work. It was my first long slow run with my new technique so I was interested to see how I would go. The pace was comfortable at around 5:40 and I felt great (aside from my ongoing toe issue which has also improved remarkably). The real test was coming. After returning from the out and back we were straight into a fartlek session. It was a pyramid set, which is hard enough on the best of days let alone after a 90 min warm up run. At the end, it finished up being a 26.5km run in total and I was very happy with the outcome. I finally feel like my run is coming together.

With 2 more weeks left things are really starting to fall into place. Still a few boxes to tick over the next 11 days before a few days taper ahead of race day, but the excitement is building!