Celebrations after another successful race down in Wollongong were short lived and training resumed literally straight away. Sundays are usually our long ride day with a 4 to 5 hour ride, with at least a 30 min run off the bike. As the long course athletes who had raced had only ‘trained’ for 2 to 2 1/2 hours, we had to jump back on the bike post race and ride back up to Sydney. Didn’t seem too hard in theory, but theory went out the window the minute we headed off into a stiff head wind. A soul crushing 80kms and 3 1/2 hours later and it was finally time to relax and reflect on the race.

After a celebratory dinner Sunday night, Monday quickly rolled around and I was back in the pool. I was looking forward to an easy recovery session but was sadly disappointed. After Monday’s rough swim session we had a easy spin around the beaches Tuesday morning followed by 2km run efforts in the evening. It was just what the body needed to ease back into the grove ahead of what was to come.

Wednesday morning’s swim set was a cracker with Ex-BondiFit Athlete, now Pro Triathlete, Laura Siddle joining us as a celebrity coach. After our usual warm up and additional pre set war

m up to really get the body moving we dived into a set of 18 x 100s. It consisted of one easy, one medium and one hard lap, then repeat. Only each repeat had an additional hard lap. By the fourth repeat we were basically sprinting 4 back to back 100s . It was a real arm burner!

On Thursday morning we were back in the park and Laura joined us as celebrity coach once again. The set was alternating big gears and normal gears at 100% for 2 1/2 laps with a 1/2 lap recovery. The first set was big gears and it was good to be going fast again. The second set was back to normal gears and things went to a whole new level. On the half lap recovery Laura jumped in with our group and really revved us up. We got through the first flying lap in 4:51 which is above 46kmh! With Laura still sitting of my wheel, pushing me along, I managed to hold the same pace for another 3/4 of a lap before a spectacular blow up! Needless to say the next big gear set was a little slower than the first but there was definitely a few lessons learnt throughout the session. 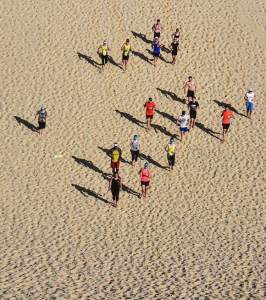 After the fireworks of Thursday morning’s bike set, Thursday night’s hill repeat run session and Friday morning’s sprint swim session were much more routine ahead of what was a pretty big week. Saturday we headed South to Cronulla Beach. The main session was a long run with a twist. It started of with a 6km run south around the coastline and harder back. This was followed by a 3.5km easy run to the Wanda Sand Dunes where the pain was still to come. We were handed down the challenge of three hard efforts up ‘The Mexican’ which is a rather steep 50-60m  dune with a steep 10m kicker at the top! There was plenty of burn in the legs by the end of it. This was followed by a 3.5km race back to South Cronulla Beach. The ocean swim that followed was certainly needed to cool down.

Saturday’s big effort was followed by a the usual long ride, this time down to Austinmer and back, followed by an easy 5km run off the bike. Sounded simple and was quite easy on the legs until we turned for home into another stiff headwind. It finished off what was a rather tough week for a post race week. Granted it was only an olympic distance event compared to a half ironman race, but it was tough nonetheless.

The next three weeks will be harder than usual,   as my usual training schedule will be interrupted by three separate road trips. The foot will need to be kept firmly planted to the floor as I will only have one full weekend of preparation at the end of all the travel before hitting the start line at TriNowra. Can’t wait!