Taper week is an interesting one. For some it is a time to relax and recover in the lead up to an event. For others it is a chance to get in some last minute panic training. Sometimes it can be just about completing a few key sessions to keep confidence up. For me, this week was all about survival!

Being my last big build race before my goal race in Cairns in June, the plan this time around was to go in on a short taper. My body tends to bounce back on a short recovery so it is time to test the theory. After two massive days last weekend I hit the pool Monday morning for squad. Monday mornings are usually my sleep in however I had some work commitments in the afternoon so I had to suck it up and drag myself out of bed. It was a tough session but I surprised myself. I finished the session off strong and was looking forward to a few easier sessions over the coming days.

Tuesday morning was the usual strength endurance hill set. The plan was to take it easy and not dig myself a hole 5 days out from race start. As it turned out, there was no risk of me d 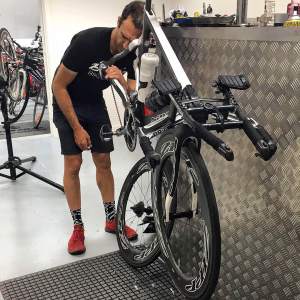 igging a hole as I found myself deep in one from the get go. Usually when you are fatigued you can ask you body to give you at least one good set or rep. This was a different kind of feeling, I had absolutely nothing. I was well off what I am capable of and felt completely weak. I spent the rest of the day eating like I hadn’t seen food for a week! I hit the afternoons run session feeling far more spritely as a result. The run set consisted of 3x3km building speed and it went remarkably well considering what sort of shape I was in during the morning ride. I figured I just needed some extra fuel and I was back on track.

Oh how I was wrong. Wednesday’s swim was the usual Friday sprint session pulled forward as a large contingent of the swim squad are due to compete tomorrow at the Cole Classic in Manly.  I felt alright in the warm up but when it came time for the efforts I knew I was in trouble. My body was once again failing to respond when asked and I ended up pulling the pin on the set early. After sitting down with Coach Spot to discuss the race plan, we decided it was best to take it easy until Saturday. That meant a full day

of Thursday which worked wonders. It was like I’d had a week of during Friday’s pre flight taper swim. After easing into it, I felt strong and full of energy once again.

Finally down in Geelong and the turbulent week continued. Somewhere along the way I managed to pick up the most subtle of rear tire leaks that meant I only made it 20km through test ride around the bike course. Not even the experts at Baretta’s Bike Studio could find it! Nothing a bit of sealant can’t fix however and I was back on the road. With the bike sorted and racked I got a short sharp swim in, felling pretty good once again.

It will be interesting to see how this short taper experiment
goes. Part of me feels like I may have peaked a week early as I still don’t feel as energised as I usually am. Part of me also knows that once that gun goes off tomorrow everything is likely to fall into place. Either way I’m excited to race again and can’t wait to get amongst it tomorrow!