Sunshine Coast was a big race for me. After the disaster that was Cairns three months earlier, I was really wanted to get things back on track. The training block leading up to Cairns was a little different as I needed to let my strained medial arch

calm backdown before I could start to run again. This meant that the first half of the block consisted of only swimming and riding but mostly a lot of swimming. After a lot of physio to get the body right I eventually started running six weeks out which I figured would at least get me to the end of the run without having to walk.

Sunshine Coast was also a little different as Spot and I decided to go into the race with a limited amount of tapering. My last hard session was Thursday mornings bike intervals before flying up to Sunshine Coast on Thursday night. Friday consisted of some recon of the bike start and a few efforts totalling 1 hour with Saturday consisting of a 30 min bike, 20 min run in the morning and a 15 min afternoon swim. For something different I even got a massage between the morning and afternoon sessions, more for relaxation that anything.

Race morning was full of excitement rather than nerves for a change. The weather was fantastic after the threat of rain was forecast all week. I  self seeded myself in the first group similar to Cairns but was situated in the middle of the group this time, rather than towards the front. The swim which consisted of a single lap south along Mooloolaba beach and back much calmer than Cairns which made for a slightly faster time. I went out solid and if anything I felt I eased back a little on the lap back up the beach. I even managed to catch a wave into the beach which is something I haven’t experienced in a race before.

T1 went really smoothly for a change and I was out and on the bike course before I knew it. The plan was to ride really slow over the rolling hills out to the freeway, no matter how many people passed me, with a careful eye on my watts in order to not blow my legs up. Once out on the freeway I settled into and found my target watts of 240 really comfortable and was slowly making my way up the field. There seemed to be a steady tailwind so I was sitting just above 40km/h on the out lap. I hit the turn and found myself nestled in a small group

of 6 to 8 riders who couldn’t seem to get settled, taking it in turns to surge to the front, only for someone else to do the same shortly after.

We got to the end of the freeway and the group pulled away from me. The plan, like at the start of the race, was to ride the hills between the freeway and the beach slow and on my watt target. I negotiated the tricky lap through town without too much drama and was soon back on the freeway. There wasn’t too many other riders around by this stage as the field had spread. My watt target still seemed pretty comfortable but I resisted the urge to lift the effort too early. After hitting the final turn around the plan was to stretch the legs and see what was left on the run back into town. I lifted my output around 10% and found myself holding slightly above 260w all the way back to town. I even managed to pass the group I rode back to town with on the first lap a few kms from the

end of the freeway. I held the extra effort all the way to T2 where I managed another smooth transition.

I hit the run and the legs just wanted to go but I knew coming into the race with limited run training I needed to take it easy. I slowed up over the little ride and found a steady tempo or so I thought. I looked at my watch and I was running at least 25 seconds a kilometre faster than I was planning to. It still felt ok so I thought I would see how it goes. I had the watch set to 4km intervals and the plan was to get a few second quicker every 4kms. The plan worked! Despite starting faster than I thought I could handle, I managed to get a little quicker every 4kms and even managed to sprint down the hill into the finish. There were times when I thought I couldn’t lift the pace any faster, especially over the last 5 to 6 kms but I just kept finding something.

The final result was a 4:40, by far my best race so far. Everything just came together. 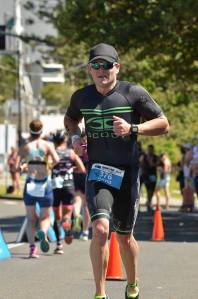 The swim was solid without hurting too much. The bike leg went exactly as planned with it ending up being a 2:17 split, just shy of a 40kmh average. Finally the run was far better than I had been expecting. One of the big differences in this race was also my nutrition. My nutritionist, Kate Johnston from Kore Well-Being, 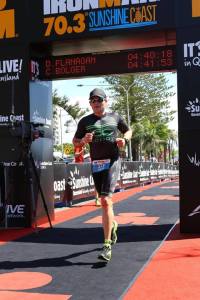 who I starting working with a month after Cairns, came up with a very good nutrition plan, not only for the race but in the lead up as well. I experimented with mixing all the gels for the bike into a bottle of water, rather than having to open them one at a time during the ride, which usually slows me down. This worked exceptionally well. I also carried salt tablets on the run, which is something I have never done before.

All in all, Sunshine Coast was very satisfying. It was also a great confidence boost after the disaster at Cairns and has left me hungry for more. Really looking forward to Port Macquarie Ironman 70.3 in just 5 short weeks!