After my best ever race to date at Sunshine Coast 5 weeks earlier, 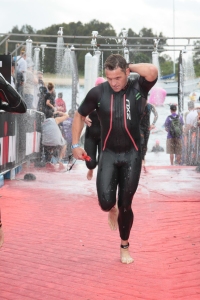 I was really looking forward to having my first crack at the very challenging Port Macquarie course. After a gentle week of training following Sunshine Coast, I had three solid weeks of training and was very confident of another good outing. A I had a little more of a taper ahead of the race, just to freshen up given such a short turn around between races. It was also nice to drive to a race after having to fly to the previous two.

I had a very lazy day on the Friday and after a dip at the beach, hit the local pool for a quick swim, just to turn the arms over. Saturday’s morning recon ride was a little more of an effort as we headed out to check out the famous Matthew Flinders hill climb. After a a nice warm up over the rolling hills out to the famous climb, a few of the Bondifit guys and I had a crack at it. It is a pretty steep climb for a triathlon course but its very short. The first crack was solid but not too hard to save the legs. I even managed to remain in the saddle. We then headed a few kms out along the course and proceeded to so a race pace effort over the 8 or so kilometres into town which went really well. I decided I would once again get a massage ahead of the race before heading down to the swim course to check it out and have a quick swim over a small section of the course.

Race start was a little later than usual which mean the alarm could be set half an hour later which is nice. With Port Macquarie doubling as the Australian Championships it was back to age group starts with mine the third last to go before the teams got under way.

The first and longer leg of the swim was up the river and with the current which was nice. The plan was to swim easy to the first buoy before picking up the pace. Everything was going well and I felt comfortable. Once again, solid without overdoing it. After having to briefly wade through shallow water for 50m or so, a few hundred metres before the end of the swim finish, I was soon out of the water and feeling good.

My transtion was one of my quicker ones which I guess comes with some practice and I was soon out on the road. The plan was to ride a a little harder from the get go and hold a higher power number throughout the race, rather than a slightly lower one then surging over the last 20kms or so like at Sunshine Coast. Apart from a little hiccup on the after the second corner where I managed to dislodge one of my salt stick dispensers, lucky I carry plenty of spares after the issues I had in Cairns, everything was going to plan. I safely made it out of town and over the rolling hills, down Matthew Flinders and got to work on the flat heading out to Lake

Cathie. Holding the extra watts was a little more challenging but so far so good.

I made my way back towards town and it was time for the first climb up Matthew Flinders. While I had climbed it twice the previous day and was confident it wouldn’t pose too much of a problem, I looked towards the summit and there was absolute carnage ahead of me. There were people walking up the side of the rode, some zig zagging all over the place out of the saddle determined to make the summit while others were making a steady ascent to the top. I got as far right as I could and pounded my way to the top, just wanting to put it behind me. The harder part of the climb is actually the steady ascent up lighthouse road which you hit straight after turning the corner at the summit. Your heart is racing and your legs are burning and all you want to

do it get it all under control but as you are still steadily climbing it is easier said than done.

Nevertheless I was quickly at the turn around and heading out on my second lap. I hit the turnaround and it was getting a little harder to hold on to the higher watts but I still had a little left for the run home. I headed through the last aid station with 20km to go and just as I was ready to launch I felt the front end of the bike get a bit sponging. Once of my worst nightmares had come to lift, a flat tyre! I had run through this scenario hundreds of times in my head but it is very hard to prepare for it.

I pulled over and as soon as I stopped riding, where the breeze has been keeping me somewhat cool, the sweat started pouring down my face, washing suncream into my eyes. I was very frustrated at this point. I grabbed out my pitstop only to find it had ruptured under my saddle so was completely useless. I was now ropable! This meant if I wanted to continue I was going to have to change the tyre. After contemplating whether or not to call it a day or change the tyre I pulled the front wheel off and went for it. It was the first time I had changed a tubular, let alone in a race. It was much easier than I had anticipated, or maybe it was just the adrenalin pumping. I soon had the tyre off the rim and had stretched the new one on. After some fumbling and two Co2 canisters later, I had it inflated and was ready to go. The service bike turned up just as I finished and th

ankfully took the flat tyre for me and I was soon on my way.

This is where things really went wrong. I quickly checked my watch and bike computer and figured out I had lost around 7:30 with the flat tyre. I thought to myself, that isn’t too bad, I’m sure I can make that up. As many seasoned racers would know, you can never make up time! After riding the last 20km with everything my legs would give me, I hit T2 still reasonably fresh. Bec, Mum and Dad were all there at transition and wondering what had gone wrong as they had expected me back much earlier. Trying to hold it together I gave told them what happened while preparing for the run and then scooted out of T2.

This is where it went from bad to worse. The plan was to try and run with less of a negative split compared to Sunshine Coast. So I figured I still had some time to make up to I better get to it. Keeping a close eye on my watch I went through the first 1km at a faster pace than I 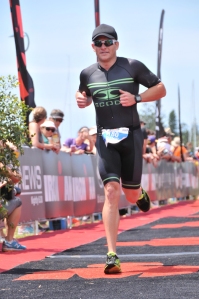 ran almost the whole run at Sunshine Coast and it felt good. By the 2nd kilometre I has slowed up 1 second per kilometre, then lost another 2 in the next kilometre. By the 4th kilometre it was becoming evident that the last 20km on the bike was going to cost me big time and I had nothing left to repay with. By the end of the 4th kilometre I knew I was done. Not wanting to risk injury given my history of breaking down while running, I slowly backed it off and just focused on finishing. A couple of kilometres later and I had made peace with the fact that this wasn’t going to be a repeat of Sunshine Coast and I tried to make the most of it.

I really enjoyed the back half of the run now that the pressure was off. I chatted to others whole were struggling and walked most of the aid stations, taking in as much as I could, thanking all the volunteers while I was at it. I knew it would only be a matter of time but one by one, the other boys from BondiFit caught and passed me and I did my best to rev them up for a big finish. While the race didn’t go to plan, I managed to take a number of positives from it which will serve me well in the races to come. Most importantly I came through it injury free and looking forward to a very light week of training before knuckling down for Geelong 70.3 in February.